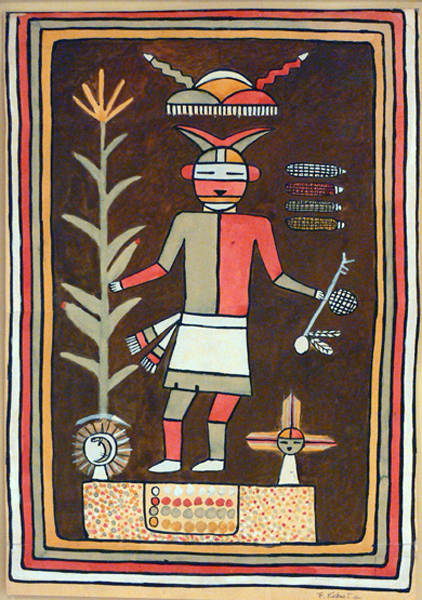 Fred Kabotie was born in Shungopovi, Second Mesa, Arizona where he continued to live most of his life. His Hopi name was "Nakayoma," meaning Day After Day. In 1906, his family and other Hopis founded Hotevilla, an organization to preserve Hopi traditions. In 1913, the children were forced to go to government school, and for discipline he was sent to the Santa Fe Indian School where Elizabeth DeHuff encouraged her students to make pictures of their Native cultures. Missing his home, Kabotie painted katsinas and sold his first painting for 50 cents to the school's carpentry teacher. In 1933 Mary Colter, working for the Fred Harvey Company, commissioned him to paint murals in her Desert View Watchtower, located on the South Rim of the Grand Canyon. Kabotie and his cousin created innovative silver jewelry designs inspired by traditional Hopi pottery. In 1937 a high school opened for Hopi students and Kabotie taught painting there for twenty-two years.