Perhaps one of the most powerful environmental photographs ever taken is a gorgeous color view of earth from space, captured on December 7, 1972, by the crew of the Apollo 17 spacecraft during its manned lunar mission. The picture was nicknamed “the big blue marble” because that’s how earth appeared. Many people were smitten 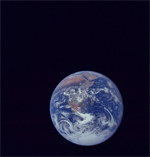 with this novel view of the earth and considered it a very beautiful image. Suddenly we saw our planet from a different perspective, one that revealed both its enormity and its vulnerability. The picture was surely as influential as anything made by Ansel Adams or Eliot Porter in getting a broad spectrum of folks to think about their roles as stewards of the earth. Like some of their best nature photographs, it inspired a sense of wonder.
http://www.acclaimimages.com/_gallery/_image_pages/0124-0609-2102-2213.html

I was reminded of that picture and its impact on hearing space shuttle Endeavour’s commander Mark Kelly speak recently about his view of earth from space. Talking with radio host Scott Simon on Weekend Edition Saturday, Kelly said, “Just looking down, we’ve got a very fragile and beautiful place to live. We need to take care of it.”

The U.S. space program is an example of the tremendous imagination, ingenuity, and persistence of the human species. The website for the National Aeronautics and Space Administration (NASA) states that, “NASA’s mission has always been to explore, to discover and to understand the world in which we live from the unique vantage point of space, and to share our newly gained perspectives with the public.” One of those perspectives, gleaned most viscerally from NASA’s photographs, is that we inhabit a big ball in space that is uniquely conducive to our life form. We need to apply that insight, along with the imagination, ingenuity, and persistence that got us into space, to some of the problems we’ve created here on earth. If we are capable of doing nearly anything we put our minds to, let us be capable of doing that.