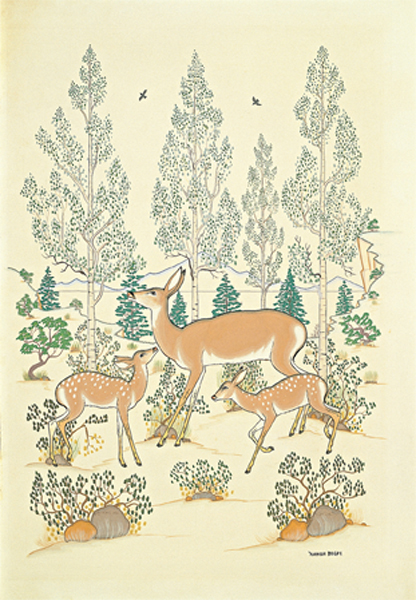 Harrison Begay (Haskay Yahne Yah) (Warrior Who Walked Up to His Enemy) was born at White Cone, Arizona and as a boy herded his family's flock of sheep. In 1927, he was sent to school at Fort Wingate, from which he ran away to spend the next four years at home, studying alone as he tended the sheep. It was at Dorothy Dunn's studio at the Santa Fe Indian School that he learned to depict pastoral landscapes and tribal traditions in flat, smoothly brushed forms alongside other young Navajo painters, Gerald Nailor and Quincy Tahoma. He cofounded TEWA Enterprises, which made silkscreen prints of his work and made it affordable to the general public. Begay is known as the patriarch of twentieth century Navajo art and received many prestigious awards and honors throughout his 75-year career.