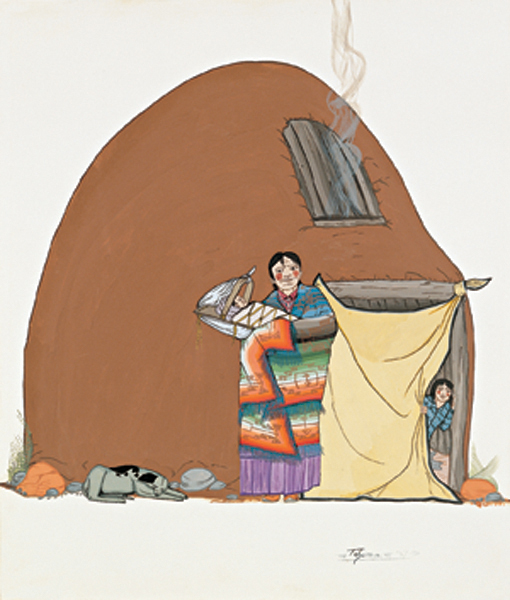 Quincy Tahoma was born near Tuba City, Arizona and given the name Tahoma, which in Navajo means "Water Edge". As a boy he spent much of his time hunting and fishing, the inspiration for much of his later work. Tahoma studied at the Santa Fe Indian School along with other well-regarded Indian artists such as Harrison Begay and Andy Tsihnahjinnie. His teacher was Dorothy Dunn who encouraged her students to paint in a flat and decorative style specific to early 20th-century, studio-taught painting, but Tahoma incorporated more action and varied techniques in his work.

He served overseas in World War II as a Code Talker with the United States Army, and then worked a short time as a painter in Hollywood movie studios. As a full-time artist, he set up his studio in Santa Fe, but he died tragically at age 35.

His paintings have a special "signature" that shows the "end" of that particular painting--i.e., a painting of a young girl standing by a horse might have in Tahoma's signature block a tiny picture showing the girl riding the horse.