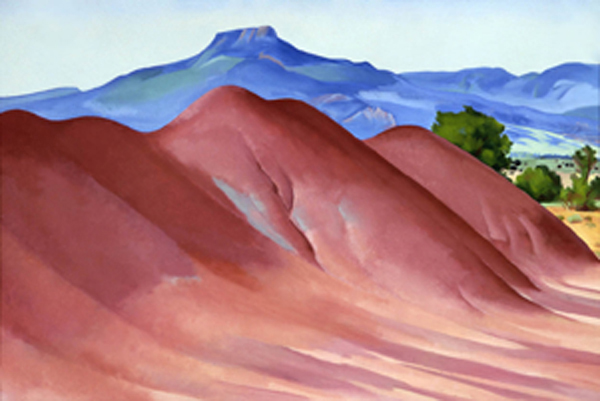 Georgia O'Keeffe, born in Sun Prairie, Wisconsin, was a major figure in the American Modernist art movement of the early 20th century. She challenged the boundaries of modern American artistic style, synthesizing abstraction and representation, transforming her subject matter into powerful iconic images. O’Keeffe enrolled at the Art Institute of Chicago and later, the Art Students League in New York City. She also worked with Arthur Wesley Dow whose influence strongly affected O'Keeffe's thinking about the process of making art. She exhibited with other pre-eminent artists in the avant garde art movement in New York City at Alfred Stieglitz’ 291 Gallery. She and Stieglitz married in 1924. After a first visit to New Mexico in 1929, she was inspired by the landscape and forms of the region, which she visited and painted from 1929 on, buying a house at Ghost Ranch in 1940, her well-known hacienda in Abiquiu in 1945, and moving to New Mexico permanently in 1949 after Stieglitz’ death. O’Keeffe is chiefly known for paintings of flowers, rocks, shells, animal bones, and landscapes. Her paintings present crisply contoured forms co-existing with subtle tonal transitions of varying colors. Although she had lost much of her central eye vision, O'Keeffe continued to paint until only weeks before her death in Santa Fe, NM in 1986.