Exhibit Home » Art » The Long Walk of the Navajos 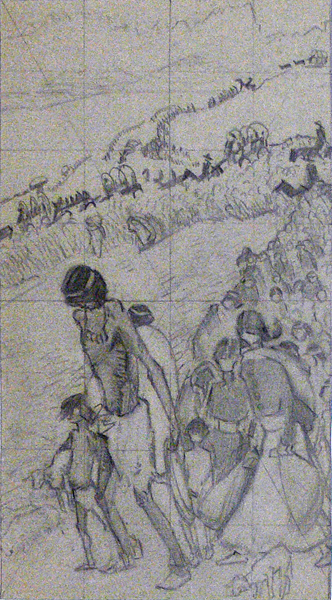 Ernest Blumenschein was born in Pittsburgh, Pennsylvania, the son of a prominent musician and originally trained as a violinist at the Cincinnati College of Music. Deciding to pursue a career in art, he enrolled at the Art Students League in New York and continued his training at the Academie Julien in Paris. While there he met fellow students Joseph Henry Sharp, Bert Phillips and E.I. Couse, who inspired him to visit the American West. Travelling to New Mexico with Bert Phillips in 1898, they ended up in Taos, the result of a broken wagon wheel, and Blumenschein found his great inspiration as a painter. By 1918, he settled permanently in Taos with his wife, Mary, also a successful artist, where they became the center of cultural life for the next five decades. He became one of the Southwest's best-known painters of pueblo Indian and Spanish American cultures and the landscape they lived in.