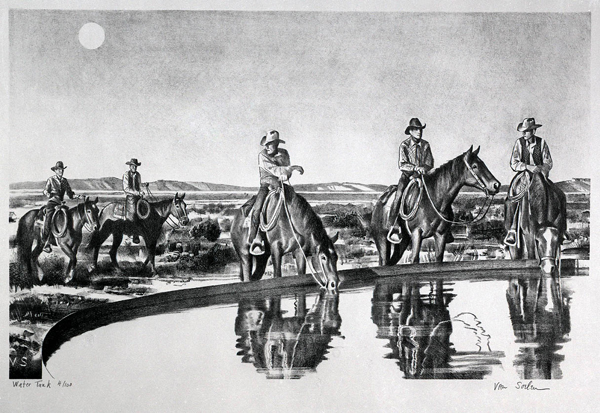 Theodore Van Soelen is a native of St. Paul, Minnesota, where he trained in art at the St. Paul Institute. He continued his studies at the Pennsylvania Academy of Fine Art, which also awarded him a traveling scholarship to tour and study in Europe from 1913-1914. Shortly after launching his art career back in the United States, he headed west, seeking relief from tuberculosis, and settling in Albuquerque in 1916. Van Soelen spent time in the small towns and ranches of New Mexico to acquaint himself with the people and landscapes of the region. Scenes of ranch life, executed in a realistic illustrator style, became his favorite subjects. He also painted landscapes and formal portraits, and produced several popular lithographs on cowboy themes. In 1938 Van Soelen won a mural commission for the Post Office in Portales.