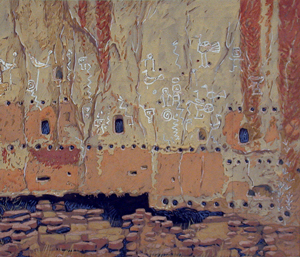 The Ancestral Pueblo people of the Four Corners area created the first permanent shelters in New Mexico. Their history is divided into two distinct periods, the Basketmaker and the Pueblo. The earliest Basketmaker shelters were built with rock and made use of canyon overhangs and caves. Shelters evolved into pithouses, underground dwellings with earth and timber roofs. Sometime after the year A.D. 700, rooms were built above ground; this is considered to be the Pueblo I period. The above ground shelters were made of stone and mud, and pithouses were still present in groups of buildings.In the Pueblo II period shelters included multi-storied houses constructed from stone masonry and subterranean ceremonial kivas. By the period known as Pueblo III, the Ancestral Pueblo people had evolved into extraordinary architects, masons and community planners.

Chaco Canyon is a famous Pueblo III site in the four corners area and Pueblo Bonito, a “great house”  in Chaco, is a fine architectural example of  this period. Important characteristics of Pueblo Bonito include a D-shape plan with rectilinear buildings facing south for warmth, a large central plaza, and approximately 35 small kivas and 2 great kivas. The Chacoans were expert masons, and they used local sandstone, which they shaped into bricks and laid carefully in horizontal strata. The ruins that exist today are a testament to how well they were built.

Archeologists believe that Chaco Canyon was an important spiritual center for the Ancestral Pueblo people, based on the great number of kivas, and the many spiritual objects found in the ruins. There is also a belief that Chaco buildings were carefully aligned in order to observe lunar and solar cycles. Periods of drought, and possibly other strife, caused the inhabitants of Chaco Canyon to leave by the 14th century.

After they left their settlements in the 1300s, the Pueblo people made their way to the Rio Grande and its tributaries, and to more mountainous settlements in western New Mexico. Pueblo IV architecture was made from “puddled adobe” (mud laid in horizontal layers to build up walls), stone and sod blocks. Multi-storied residences were geometrically arranged around large plazas that included ceremonial kivas. Doors and windows were minimized, and ladders were used to access upper level buildings.  They were situated to make use of water and to provide protection from marauders. 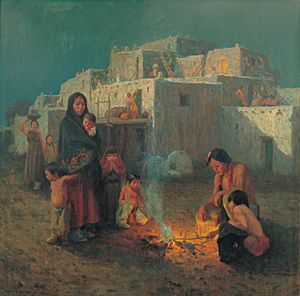 Taos Pueblo was first settled during this period and it has been continuously occupied ever since. Over the centuries the pueblo grew into a beautiful arrangement of stacked and clustered blocks of buildings that have inspired architects, as well as painters and photographers, throughout recorded history.

Adobe building changed after Spanish contact, beginning in 1593. Pueblo Indians adopted the Spanish technique of forming mud into sun dried adobe bricks. In the Pueblo V period, which began in the 1700s after the Spanish reconquest and continues to the present day , Spanish and Pueblo cultures shared and adapted construction techniques and design.

Zuni Pueblo is considered a Pueblo V building. The original, small community built of stone grew organically into a large multi-storied pueblo built with adobe bricks. Fireplaces, chimneys, horno ovens, parapets, and terraces were some of the architectural developments that occurred during the early Pueblo V period.