In the beginning of the 20th century, there was a growing interest in the Southwest among European and American artists, and many came to visit, tour and work in New Mexico. Santa Fe and Taos became the most popular artist communities and the centers of the art scene. After statehood in 1912, a wave of academically-trained realist painters came who were attracted to the land, the light and the native cultures. They painted images of the native peoples, their homes and the surrounding landscape.

The 1913 Armory Show, in Chicago and New York, introduced the public to the most radical European and American art, and artists began to align themselves either with the new, the "modernists," or the old, "the academic realists." Modernist art expressed a more personal and emotional response to the world, rather than a replication, or mirror, of reality. In New Mexico, modernists were drawn to Santa Fe, where the Open Door policy of the Museum of Fine Arts created a place for progressive and modern artists to show their work. Well-known artists Robert Henri and his friend John Sloan were frequent visitors from the East Coast who drew other artists to Santa Fe. European-trained academic painters and illustrators mostly congregated in Taos. After WWI these communities broke into distinct societies that sometimes overlapped and sometimes opposed each other. As time went by, art from both groups became more modern and abstract. 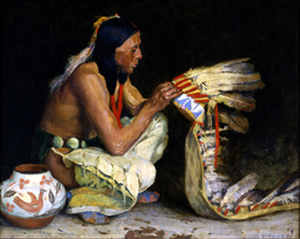 Academic painters based in Taos created pictures of Hispanic and Native American people engaged in everyday activities and religious rituals. These romantic and impressionistic pictures became some of the best-known art from New Mexico. Their images were both ethnographic studies and nostalgic portrayals of an almost bygone era. The Taos painters were exclusive about their membership, and at one point, had members deported if they were not U.S. citizens. Irving Couse, Joseph Henry Sharp and Victor Higgins were influential members of this group. 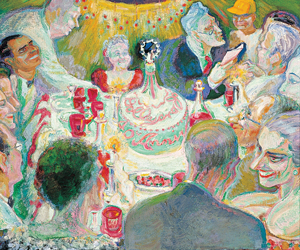 In Santa Fe, five young artists formed Los Cinco Pintores on the idea of bringing art directly to the people . Will Shuster and Jozef Bakos were influential members of this group. The Santa Fe artists were somewhat notorious for wild parties and drinking in the time of prohibition. The social conservatism of the political leadership in Santa Fe did not approve of their life style, or their progressive political views.

Another group known as the"New Mexico artists" attracted more modernist painters. The coalition did not last long, but members such as Andrew Dasburg, Gustave Baumann, and Randall Davey have had a long and lasting impact on the arts in New Mexico. 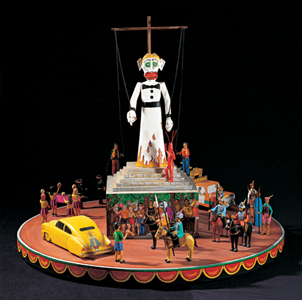 Artists in these different groups also worked together. In 1925, Will Shuster and Gustave Baumann built a human-sized marionette in their backyard and named him “Zozobra”, or Old man Gloom, and burned it during the Santa Fe Fiesta. Their objective was to burn away gloom, and to express their disapproval of the commercialized tourism that was taking over the authentic Santa Fe that they loved. The burning of Zozobra became a tradition and the most notorious event of the annual Santa Fe Fiesta. 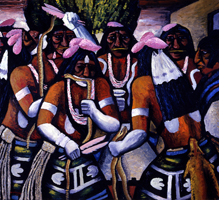 Hewett was more interested in ethnic imagery than abstraction and modernism. However, he did stay true to his policy of allowing any style of art to hang at the museum by scheduling regular exhibitions of local artists working with abstraction. Raymond Jonson was in charge of these exhibits, and he took the opportunity to present work contrary to the predictable Southwestern ethnographic genre. Jonson and his fellow abstractionist Emil Bisttram spearheaded a group of painters known as the Transcendental Painting group. Their mission was to create non-objective work that did not refer to the natural world.

In Taos, a new group of itinerant modernist artists formed around the writer Mabel Dodge. Dodge had come from New York in 1917, originally with her painter husband whom she quickly divorced after she arrived. She married Tony Luhan from Taos Pueblo shortly thereafter . Mabel had been the center of a radical salon of artists, writers, intellectuals, socialists and activists in New York, and she invited her friends to visit her in New Mexico.

One of the first artists to visit Dodge was Marsden Hartley, who was searching for a uniquely American approach to painting. Later she would be visited by Georgia O’Keeffe, John Marin, Ansel Adams, Edward Weston, Paul Strand and Rebecca Salsbury James, all prominent painters and photographers who were creatively inspired by their New Mexico visits and experiences. This group of artists were mostly associated through the gallery that Alfred Stieglitz, O’Keeffe’s husband, ran in New York City.