The Atchison, Topeka and Santa Fe Railway (often abbreviated as Santa Fe) had its humble beginnings in 1860, originally organized to connect Atchison and Topeka, Kansas with Santa Fe, New Mexico. The originator of the enterprise was Colonel Cyrus K. Holliday of Kansas, one of the founders of Topeka, and a long time resident of that city. Colonel Holliday drew up the charter of the company and as a member of the territorial senate of 1859 secured its passage. 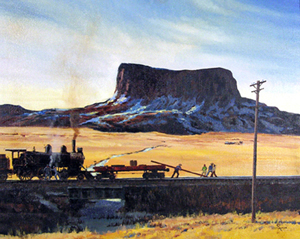 The Santa Fe's first tracks reached the Kansas/Colorado state line in 1873, and connected to Pueblo, Colorado in 1876. Although the railway was named in part for the capital of New Mexico, its main line never reached there as the terrain made it too difficult to lay the necessary tracks. The city of Santa Fe was ultimately served by a branch line from the small town of Lamy, several miles out of town. In order to help fuel the railroad's profitability, the Santa Fe set up real estate offices and sold farmland from the land grants that the railroad was awarded by the United States Congress. These new farms would create a demand for transportation, both freight and passenger service, that was offered by the Santa Fe. The Santa Fe played a key role in promoting the art and culture of the Southwest people and their “Enchanted Land,” creating a “romantic” vision of the Southwest, stimulating travel to the area.

Santa Fe passenger service, which continued until 1971, when Amtrak took over passenger service, set the standard for luxury and attention to detail, with famed trains like the Super Chief, the El Capitan, the Valley Flyer,and the Texas Chief. In association with this legendary passenger service, Fred Harvey was the first to establish a chain of restaurants, hotels, lunch counters and dining rooms to feed and accommodate millions of travelers, and in the late 19th century the Fred Harvey Company became a leader in promoting tourism in the American Southwest. The company and its employees, including the famous waitresses who came to be known as "Harvey Girls", successfully brought higher standards of both civility and dining to a region widely regarded in the era as "the Wild West". Several Harvey Houses are still operating today.

At its largest the Atchison, Topeka and Santa Fe Railway would own well over 13,000 miles and the routes which made up its system would become some of the most heavily and strategically used throughout the West that remains so to this day. Even before the intermodal revolution the Santa Fe's system was key to allowing the fast movement of goods in transit from Chicago and other gateway cities to the west coast, and vice versa. Coupled with this business the Santa Fe also served a number of manufacturing centers throughout the south and southwest.

Much of the railroad’s success throughout its existence was a result of its willingness to embrace new technologies and strive for excellence. Several “firsts” the railroad is credited with include autoracks, a term describing a railroad car built specifically with two or three levels to haul automobiles, and the innovative TOFC (trailer-on-flat-car) or piggyback service.

The mid-1990s would finally see this famous railroad’s name come to an end as it agreed in 1994 to merge with northwestern giant, Burlington Northern, to form the Burlington Northern Santa Fe Railway, who recently changed its name to simply the BNSF Railway. The Atchison, Topeka and Santa Fe Railway and its famous Warbonnet livery is gone, but its legend will live on in the songs and films and model trains it inspired.