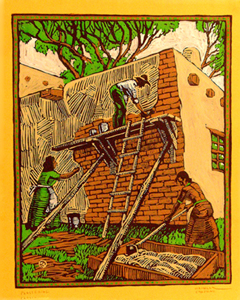 While New Mexico was under Spanish rule, architectural developments occurred slowly. Spanish settlers were cut off from trade with their fellow North Americans. Supplies, as well as technology and ideas, had to come from far-away Spain. During these years of isolation, settlers lived a subsistence lifestyle and had little money or energy for developing architectural styles or engineering. Adobe homes were simple and made from basic local materials. Details included flat roofs, earthen floors sealed with animal blood, mud plaster, wooden bars on windows, vigas and latillas for the ceiling. Glass, nails, and hardware were not available. Communities were often arranged around a plaza for defensive purposes.

Spain focused most of its effort and money on missionary activities. The mission churches were the most significant architecture during this period, and they have been painted and photographed by numerous artists over the years. Churches were built within Spanish communities in the northern mountains like at Rancho de Taos, Trampas and Chimayo, and in all of the Pueblos. The friars were in charge of Pueblo church design and engineering, and the Pueblo people supplied the hard labor. Though the history of the Pueblo mission churches is fraught with controversy and tragedy, the buildings themselves are known for their simple beauty, and they have provided inspiration for important developments in New Mexico architecture.