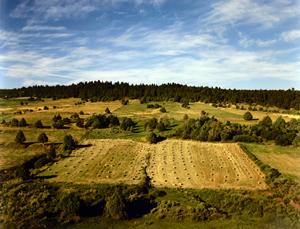 The total value of the agriculture output from New Mexico farmers and ranchers was $3.3 billion in 2007. New Mexico produces more chile than any other state in the country, and we rank second in pecan production. Within the state, milk is our number one cash commodity, followed by cattle and calves with a cash income of $955 million.

The New Mexico climate is typical of high desert conditions. There is a large amount of sun, wide temperature ranges, and lots of wind.

“The Three Sisters:” Production of Beans, Corn and Squash in New Mexico

The “three sisters” of New Mexican agriculture, corn, beans, and squash, were hundreds of years ahead of their time. This system serves as the basis for inter-cropping systems currently being used around the world as tools to increase agricultural productivity in areas facing food shortages.
Each of the “three sisters” serves an important role and supports and benefits the others. To understand the system, one should first consider the three plants separately. Growing corn in rows is a good idea but wastes valuable planting space. Beans require some sort of support system and must be staked up to grow. Finally, both squash and corn require additional nitrogen in the soil to produce adequately in New Mexico’s typically sandy soils, which are also prone to losing valuable moisture due to evaporation. 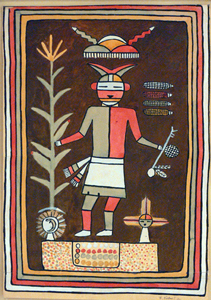 As corn reaches for the sun, beans may grow up the strong stalks and the necessity of building a support system or frame is reduced. One must plant corn some distance apart, leaving the ground bare; however, planting squash between the rows of corn reduces soil moisture loss as the squash foliage acts as a natural mulch, reducing soil temperatures and helping to “hold” moisture in the soil where it may be used by the plants and not get lost in the atmosphere. Finally, beans have the unique capability of being able to “fix” atmospheric nitrogen, pulling it from the air and improving soil nitrogen status, essentially, “fertilizing” the other two sisters…and keeping the soil fertile by converting the sun’s energy into nitrogen-filled nodules that grow on its roots.

In the Southwest, a fourth “sister” is found: the Rocky Mountain bee plant. Often growing near former Ancestral Pueblo settlements (it is virtually an indicator plant for ancient ruins) this two-to-five-foot tall, pink flowered cleome is a powerful attractant for beneficial insects that pollinate beans and squash. The young leaves, flowers, and seed pods of bee plant are edible, and native people boiled and ate them, or made a paste from the plant for later use. Bee plant also accumulates iron, and thus is the source of a deep-hued paint used to create the characteristic black designs on Ancestral pueblo pottery. Songs and blessings of New Mexico’s Tewa people mention corn, beans, squash, and bee plant, indicating that this multi-functional flower is an integral member of a sacred plant pantheon.

Chile has become symbolic of New Mexico culture and is one of the state’s biggest crops. Chiles have long been used in folk medicine, for their flavor and heat, and lately they’ve been found to have strong antibacterial qualities. They are loaded with nutrients including calcium, iron and vitamins A and C, and are sometimes used to relieve headaches. Bright red chile ristras decorate our homes.

Chile, which originated near Bolivia, is New Mexico’s most valuable vegetable—although it’s technically a fruit. It belongs to the same family as tomatoes and eggplants. As a niche cash crop, the state’s chile is worth about $60 million at harvest. After processing, its value quadruples to more than $240 million. About 95% of the crop is harvested from seven southern and eastern New Mexico counties.

Spanish settlers brought chile into what is now New Mexico in the 1600’s. Over the centuries, plant breeders transformed the plants from an unpredictable mix of shapes, sizes and heat levels to today’s uniform pods. For more than a century, New Mexico State’s College of Agriculture and Home Economics has been aiding the state’s farmers in developing new and improved varieties, in addition to promoting innovative and economical new ways to harvest the stands.
In 1888, horticulturist Fabian Garcia, working at what was then known as the New Mexico College of Agriculture and Mechanical Arts, began a series of groundbreaking experiments to develop more standardized chile varieties. Early in the 1900s he released “New Mexico 9,” the first variety with a dependable pod size and heat level. New Mexico’s chile industry now boasts many varieties – greens, reds, jalapenos, cayennes and paprikas.

New Mexico state chile breeders developed a new paprika variety call “NuMex Garnet” that produces the reddest pigments commercially available. Throughout the world, red coloring is commonly extracted from paprika powder and used in a stunning range of consumer products from lipstick to pepperoni. Use of chile as a natural coloring agent began almost two decades ago, when the federal government banned a widely used red dye because of cancer risks….
Other New Mexico State researchers are looking at chile processing. For instance, the New Mexico Chile Pepper Task Force has identified mechanical harvesting of chile as key to the survival of the industry in the state. Hand harvesting of chile accounts for 40 to 60 percent of the total farm costs of chile pepper production for New Mexico. New Mexico growers pay a minimum of $5.15 per hour, while foreign competitors pay as little as $1 a day.

The U.S. Department of Energy’s Sandia National Laboratories, which often does research on advanced weapon design, agreed to aim its engineering horsepower at improving mechanical chile cleaning equipment. Under a new agreement, the New Mexico Chile Pepper Task Force and Sandia will focus on a troublesome problem for farmers as chile is harvested: too much of the plant is picked along with the peppers. Formed in 1998, the Las Cruces-based organization works to ensure that New Mexico’s chile industry is cost-effective enough to be competitive in a global marketplace. The focus is on best management practices, and developing effective drip irrigation practices and mechanical harvesting capabilities.

New Mexico is the fourth largest producer of nuts in the United States, according to Lois Ellen Frank, who is completing a PhD in culinary anthropology at the University of New Mexico, and is also an adjunct professor at the Institute of American Indian Arts (IAIA). In her New Mexico Magazine article, “Go Nuts!” she continues:

“The pinon is one of the oldest wild-harvested nuts in New Mexico, and the pinon pine is our state tree. The two-needle pinon is native to the United States and dates back at least 7,500 years….For millennia, its nuts were used by New Mexico’s Ancestral Puebloans and other historic tribes living in this region, and cracked nutshells are found at virtually all such archaeological sites. Pinon nuts contain the 20 amino acids that make up a complete protein, as well as more than 3,000 calories per pound, making the nut’s protein density comparable to that of steak. Of the nine amino acids essential to human growth, seven are concentrated in the pinon, which is also an excellent source of potassium. Whether eaten roasted or raw, pinon nuts are delicious by anyone’s standard.

"Another nut produced in New Mexico is the pecan. The pecan is the most common name for a species of hickory that belongs to the walnut family. Frank states, “Pecans grew wild in Texas and in northern Mexico….It is believed that they were then propagated to the north and east by wild crows, which prefer the thin-shelled nuts and can carry them many miles….The word pecan derives from the Algonquin word pacane, meaning ‘nut to be cracked with a rock.’ Wild pecans were a major source of food for various tribes, and some tribes’ activities and settlements actually followed the maturing harvest of the wild trees….Pecans are a good source of oleic acid, a monounsaturated fatty acid considered to be good for the heart. They contain more than 19 vitamins and minerals, and are a good source of vitamin E and fiber. Today, pecans are grown commercially in and around communities in southern New Mexico, including Alamogordo, Carlsbad, La Mesa, Las Cruces, Mesilla, and Roswell.”

"The Pistacia vera, or pistachio, a native of the Middle East, is grown in Alamogordo, which, Frank explains, “boasts one of the few climates in the United States with summers long, hot, and dry enough to grow pistachios.

"The eastern community of Portales is the top producer of organic peanuts. Valencia peanuts are the primary variety grown. Smaller and sweeter than their conventional counterparts, Valencias are favored by candy makers, and also make a satisfying peanut butter."