The Camino Real, or Royal Road, provided the way for many settlers to travel across the vast Chihuahuan Desert to what is present day northern New Mexico. The arrival of the Spanish created great changes in the native culture, especially with the introduction of horses. Prior to Oñate's expedition, horses had been extinct in the Americas. The horses that Indians acquired were descended from those in caravans who ran off or were captured in native raids. Indeed, the capital city of Santa Fe may not have even been named had it not been for the Camino Real. 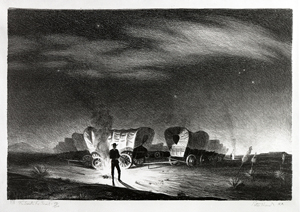 The Santa Fe Trail served as a trade route between Missouri and the Mexican frontiers from 1821 to 1880. This route opened up the door for New Mexico to trade with northern states for manufactured goods. In the 1820s, wagon trains were being sent over this trail from the Missouri River to Santa Fe, but it was not until 1821, when William Becknell, a Missouri trader, packed his wagons and cleared a passable trail that this road became widely traveled. Becknell’s mule train passed through Morris County, at what became known as Council Grove, the only trading post between Independence, Missouri and Santa Fe, New Mexico. The Santa Fe Trail was established to haul freight from Kansas City to Santa Fe, New Mexico and to trade with the Spanish. It also became an important passage during the Mexican American war, enabling soldiers of the west to invade New Mexico. Once the Treaty of Guadalupe Hidalgo was signed in 1848 ending the Mexican-American war, the Santa Fe Trail became a national road that connected the greater U.S. to the southwestern territories.

In 1598, Juan de Oñate departed from Zacatecas, Mexico, with the order from King Phillip II to settle New Mexico. Oñate and his followers traveled through Juarez, following the Rio Grande and stopping briefly along Pueblo settlements along the way. Not only were the Pueblo peoples expected to submit themselves to the new rule of Spain, but also to a new Christian religion. After several months of traveling along the Rio Grande, the first Spanish headquarters in New Mexico was established at San Juan de los Caballeros, at the junction of the Rio Grande and Chama Rivers. Shortly thereafter, the headquarters were moved across the river to San Gabriel, near present-day Espanola. In 1609, Oñate resigned from his post as governor, not getting along with the members of his colony. He was replaced by Don Pedro de Peralta, who was to lay claim to a region primarily populated by Spaniards, and also one with more fertile grounds for farming. Peralta chose Santa Fe for the new headquarters, as the area had ample water with the Santa Fe River running through the town. In 1610, the capital moved 20 miles south to Santa Fe and established its seat of government there.

Although the Spanish were small in number, the Pueblos in the region were beginning to feel the weight of power upon them, as they were being forced to abandon religious dance and prayer rituals in their pueblos. This, along with Apache raids, was enough for the Puebloans to begin blaming the Spanish for their loss of crops, as well as lives of family members as fighting began among the Natives and Spanish. 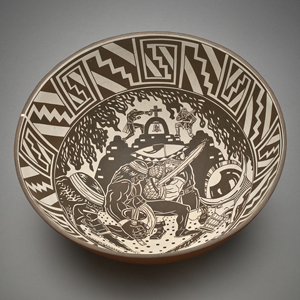 In 1680, the Pueblo Revolt took place among the Pueblo Indians against the Spanish colonists. From the Tiwa people of Taos Pueblo to the Tewa people located north of Santa Fe, the Pueblos joined together to fight the oppressive rule of Spain. The Pueblos planned a surprise attack on the Capital of Santa Fe, using the knots on a rope to count down the days until the attack would take place. The plan was for Pueblos to come together on the attack, and capture the Spanish colonists, as well as the capital territory. Not all the Pueblos had received the ropes with counting knots, and thus were unaware of the siege, but nonetheless, the revolt took place on August 10, 1680, and was successful. Many Spanish were captured and forced to return to Mexico, only to return twelve years later and once again take over the capital of Santa Fe. This time though, the Spanish realized that they would have to be more tolerant of the Pueblo ways, and implore them as allies against the hostile tribes living on the outskirts of New Mexico territory. To the north there was the Jicarilla Apache tribe and to the east there was the Comanche. To the north there were the Utes, who were not only fighting the Comanches, but also the northern Pueblo tribes and the Spanish colonies if they felt the need. To the northwest, there was the Navajo tribes, and to the southeast there were other Comanche tribes. To create a more peaceful and allied territory, the Spanish established a friendly relationship with the Pueblos and no longer ruled over them with an iron fist.

In 1706, present day Albuquerque was established south of the capital to accommodate the growing population along the Rio Grande. New Mexico remained under Spanish rule until 1821, when New Mexico won its independence from Spain. As New Mexico was enjoying its newfound independence, new settlers were continually entering the territory from the north through the Santa Fe Trail, and the south through the Camino Real. As these newcomers continued to settle along the Rio Grande, the frontiers were also being settled upon, establishing New Mexico’s ranchos and estancias. 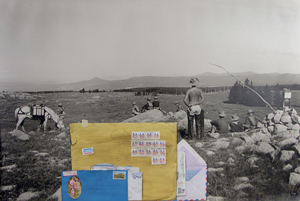 The American southwest, from Texas westward to California, was once a Spanish dominated land. New Spain was a territory long before New England was ever named, and Spanish was the primary language spoken in the region. The Mexican Americans living in the region today are descendents of the overthrown Mexican colonies by the Spanish. Before the Spanish arrived in the area, there were only Native Indian tribes occupying the Southwest region. With the opening of the Santa Fe Trail, and the emergence of tourism, the Anglo population in New Mexico’s early days quickly grew to surpass that of the Spanish. Thus, the rich culture that depicts the land is a weaving of Anglo, Hispanic, and Native American ancestry. There are nineteen Pueblo Indian tribes, two Apache tribes, and part of the Navajo Nation in New Mexico.